What is Convection Heat Transfer?

Convection heat transfer, thermal barrier, conduction heat transfer, thermal envelope. Those are probably just a few of all the terms you have heard or read up to this point while looking into insulating your home with spray foam insulation. Those are quite a few terms to have to learn in a matter of minutes but definitely worth your time. Why? Because knowing the performance of each one of these will allow you to make a good educated choice you will not regret! 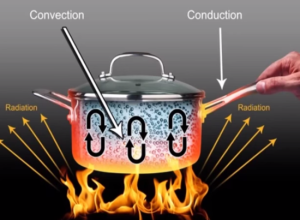 To have a more clear idea of what convection is, let’s think of it as the up and down movement of gases and liquids caused by heat transfer. When a gas or liquid gets heated, it warms up, expands and rises because it is less dense. When the opposite thing occurs the results are different. When a gas or liquid cools, it becomes more dense and falls. As the liquid or gas warms and rises or cools and falls, it creates a convection current. As you may remember, we mentioned in the beginning that convection is the primary method through which heat moves through gases and liquids.

Lets think of an example as to how this performs with Spray foam. Within a stud wall cavity, there can be convective loops. What are these convective loops? These occur when the exterior and interior temperatures differ from one another, for example the outside can be cold and the interior warm. What happens? The air within this cavity in contact with the exterior wall can cool causing it to become denser and flow in a downward movement. On the other hand, the air that is in contact with the interior wall will warm up, making is less dense and causing it to rise. This explains the “loops” we mention previously because the air is falling and rising within the wall cavity.

What would occur if we could stop this air movement? Your right: convective heat loss would stop! That is what spray foam insulation does exactly, it eliminates air movement within the insulation.

This site is a free service to assist homeowners in connecting with local service contractors. All contractors are independent and this site does not warrant or guarantee any work performed. It is the responsibility of the homeowner to verify that the hired contractor furnishes the necessary license and insurance required for the work being performed. All person depicted in a photo or video are actors or models and not contractors listed on this site.

We are here to help you!

Just choose what kind of insulation you would like, and we'll give you our list of local, personally vetted, background checked and reviewed contractors for you to choose from!